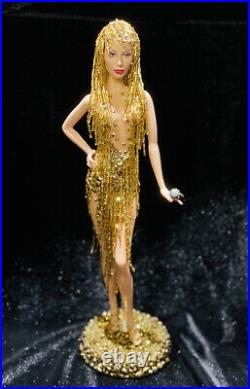 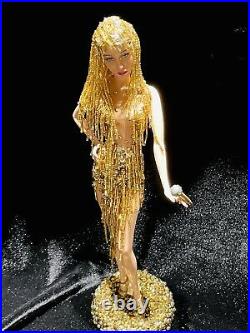 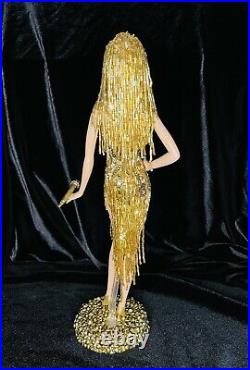 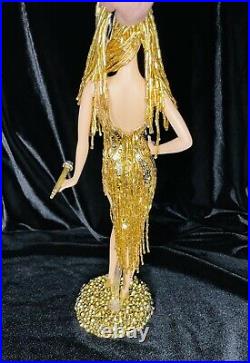 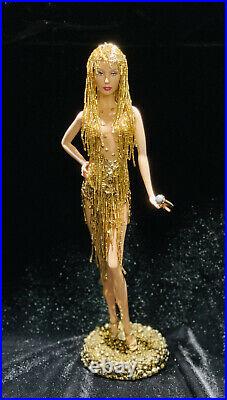 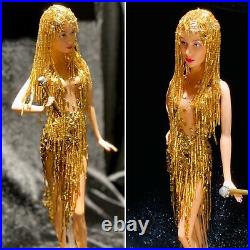 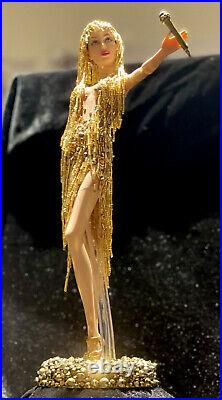 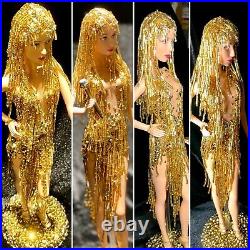 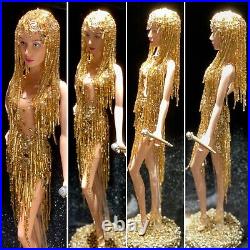 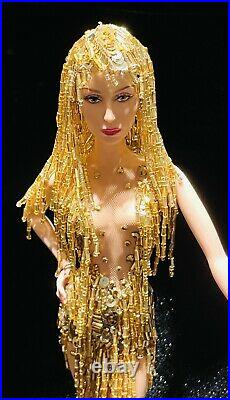 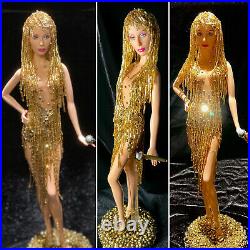 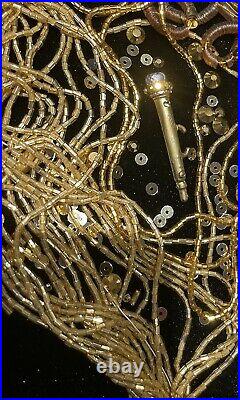 Thank you for looking at one of my most cherished items for sale whilst I was Bob Mackies assistant designer. Behold the Bob Mackie Cher Barbie of all Cher Barbies! After we didnt go into production with this doll it was considered for Mattels Dream Halloween in 2007 however it was gifted to myself. The one of a kind Bob Mackie Cher Take me Home Barbie and gold.

She was designed and made in house at Bobs studio in late/early 2005/2006 for a 2007 launch along with the other 3 Cher Barbies made for 2007, as originally there were going to be 4 dolls in the Cher collection possibly 5. AND The 2000s/Farewell Tour: Take Me Home Barbie in Gold which would be at much much higher price than the 3 that were finally produced. As you can see from the photos she certainly had more detailing and hand beading like the older Mackie dolls from the 1990s. This stunning and sparking beauty even was made(and would have been made)with the same nude mesh, beads, beading design, hand beading, Swarovskis and fringes that Chers costumes are made of to this day even the same hand beaders in Glendale, CA. This was made possible as she was to be limited to 996 as well.

However, with all the obvious detail work, hand beading, crystals drove the retail price point up to nearly 10 times of that of the 3 that did go into production. Plus she comes with her intended Pave Arum(gold Swarovski) encrusted stand and then covered with expoy resign so the stones would stay in place. The pave stand that will be packed separately. This Unique, OOAK Prototype is very hard to let go of as shes the only one in the and has much history behind her. However, you will understand why I must part with her once youve read the the description below.

A ONCE in a lifetime opportunity to own an Authentic BOB MACKIE OOAK PROTOTYPE BARBIE. During that period not only did I assist him for several design projects and Qvc/Collections/Celebrity fittings and of course Barbies! It was always a treat when we got to work on the Barbies.

BOB knew I collected Barbie dolls especially his dolls and he let me keep this one for my bday. At this point I had moved on in my career but Bob would always call me back for help on Barbie doll creations. I actually have about 5 more Prototypes all OOAK, Ill be listing soon including 45th Anniversary Barbie adorned with Swarovskis , 1970s Cher covered in Swarovskis, 1980s Cher covered with Swarovski, an more! I had the privilege to work on quite a few Barbies during that period.

About this OOAK doll, whilst in development in late 2006 early 2007 we were not sure how many Cher dolls would eventually go into production. She comes in her regular Cher original box(1980s)as there was not a proper production box made for her.

If you choose to add her to your collection she will be packed with kid gloves along with her original shoes and stand. I have all the proof that I was Bob Mackies assistant designerpay stubs, photos of myself with Bob, his bday party invites, bday photos, bday/Christmas cards to me and myself working on Barbies actual costumes and much more. Please note in the coming months Ill be listing other Barbies a lot of Mackies(most given to me as gifts from Bobs personal collection, some signed some not). If their is something your looking for let me know as I have at least 4-8 of each Mackie including Chers. This was a VERY hard decision for me to put her up for sale.

HOWEVER, after nearly 20 years in the business its time to take the leap and start my own swim collection , which is an expensive and risky feat. Instead of designing for other designers(without an ounce of credit-except Bob), manufactures and mall specialty stores.

She was never displayed and had been safely kept in her box in my climate controlled Barbie room. She comes from a smoke and pet free home.

If you have any questions at all please ask away as they will be happily answered. She comes with her stand, shoes, shipper and production 1980s Cher box. Sorry for babbling as I do get excited talking about my first boss and Barbies... Please note videos will be uploaded to YouTube within the coming days. ALL REASONABLE OFFERS WILL BE CONSIDERED and PLEASE SERIOUS BUYERS/COLLECTORS ONLY.

The item "BOB MACKIE CHER ONE OF A KIND Take Me Home Barbie Prototype/Dream Halloween 07" is in sale since Monday, October 11, 2021. The seller is "hairxtremes" and is located in Fort Myers, Florida. This item can be shipped to United States.